OlivePad has been selling for a  few months now, but it has not been able to create the interest Notion Ink has been able to generate  on its yet to be released Adam tablet.   I had been on a hunt for a decent Android Tablet for many weeks and never came across the OlivePad until one day saw one on eBay India.   This led me to Olive Telecom’s website where I found out that OlivePad is available on retail at Croma stores across India.  I picked up my OlivePad from the new Croma Store on the Outer Ring Road in Bangalore for INR 23999 (cheaper than the online prices at eBay.in).

This review is based on my hands on experience of using the OlivePad in the last three weeks.  My familiarity with Android devices which includes a Samsung Galaxy S phone running Android 2.2, a Samsung Galaxy 3 that my wife owns.  In between I also used a ten inch Chinese Apad ZT180 tablet running  Android 2.1.

Lets begin the review  with the Quick Specs of the Olive Pad VT1000.

The Olive Tab is rectangular with glass in front with a shiny black plastic in the rear. The sides are aluminum. The sides are not tapered like the Galaxy Tab which makes it look thicker. Nevertheless it’s comfortable to hold. The key here is the 7 inch form factor that is small enough to hold with hone hand. At 380 gm it’s not comfortable holding it for  long duration. However, its much comfortable using the OlivePad tablet  with the leather diary  styled jacket.

OlivePad comes with a 600 MHz ARM11 processor. The Tablet is  very responsive and I do not find any perceptible real world difference between the Galaxy S and the OlivePad in terms of responsiveness. However, ARM11 on paper appears slower compared to Cortex A8 chips being used in most recent Android Tablet, and not to mention the upcoming dual core Cortex A9 chips like the Nvidia Tegra2. Bottom line, the ARM11 chip in the OlivePd is adequate to give a very good user experience. 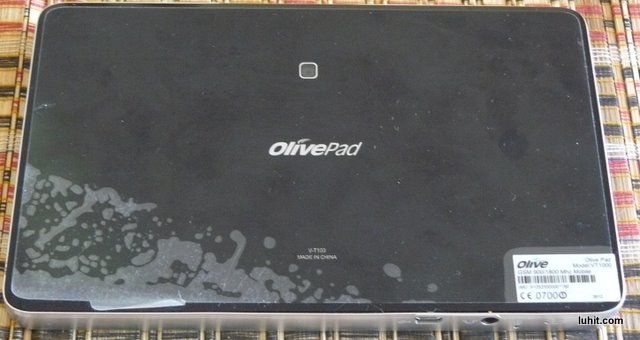 The screen at best can be called average.   It looks nice  and vibrant when looking straight, but at the slightest angle the colours start getting weird. It indicates a cheap TN panel. I am not saying that it is not usable, but this no iPAD IPS panel or the Galaxy S Super AMOLED display.  Fonts look good and crisp providing a good web browsing experience and reading eBooks is a good experience. I would suggest giving the bundled Aldiko reader the skip and installing FBReader or Cool Reader from the market.

Two speakers have been places on the top and the bottom side of OlivePad. The speaks are excellent for the form factor.  These are clear and loader than the average tablet speaker and better than some Netbook speaker. a +1 to Olive Telecom fro this.  This is a great when playing games and  I can even dare to watch YouTube videos without a headphone.

The touch screen is good and sensitive.  It supports multitouch gesture like pinch and zoom.  By default OlivePad bundles the Touch Pal keyboard, which is by itself excellent. My only gripe is that this keyboard is not designed for Tablets and occupies nearly half the screen real estate (see image gallery).   You could look for a alternate keyboard like SwiftKey in the market, at least SwiftKey occupies much less real estate and typing experience is brilliant. Even better  go for the SWYPE Beta, on the large screen of the OlivePad I am finding  SWYPE is even better than on my Samsung Galaxy S. 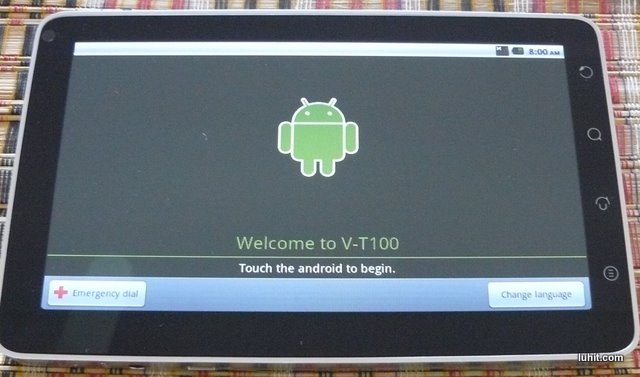 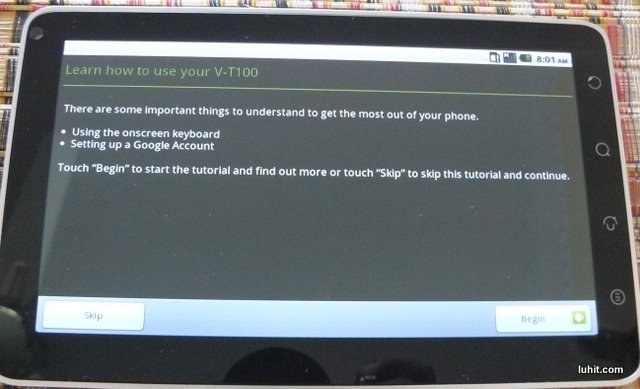 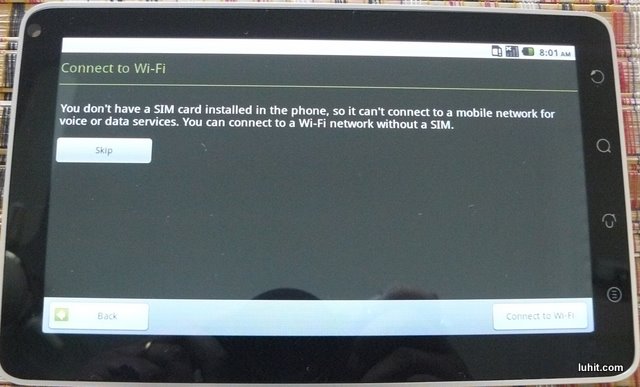 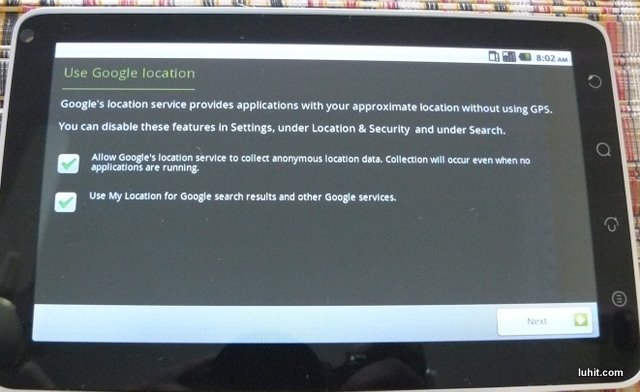 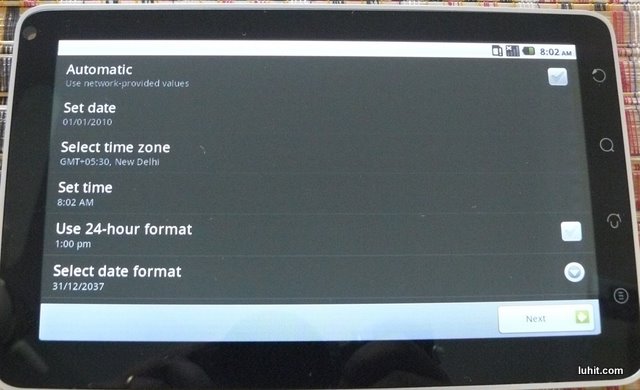 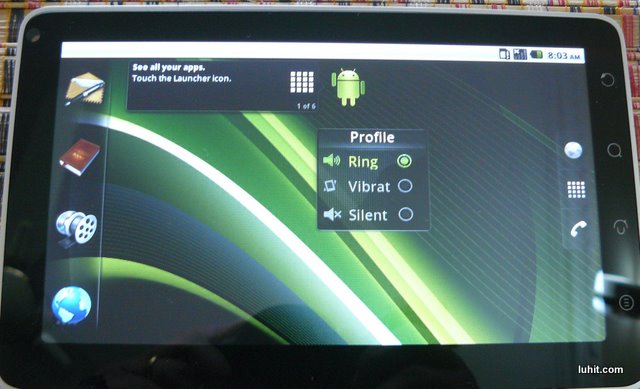 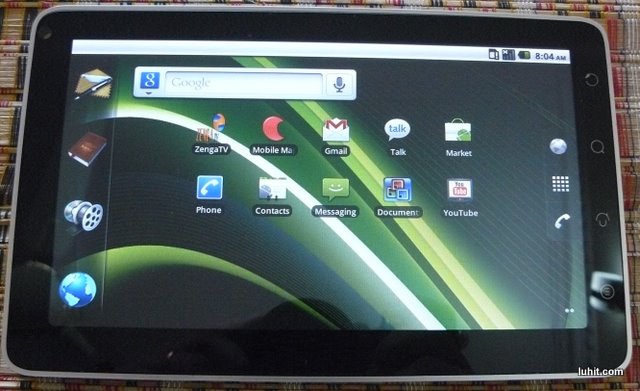 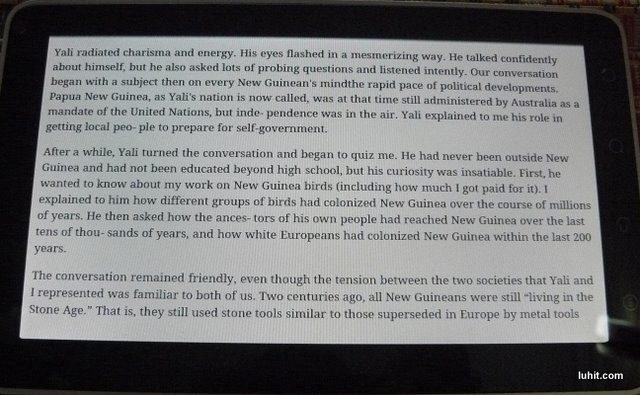 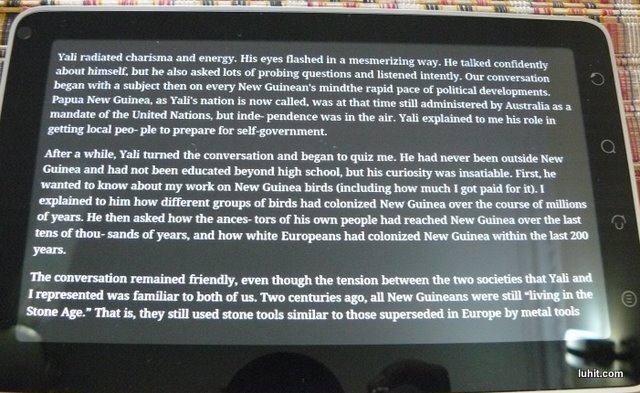 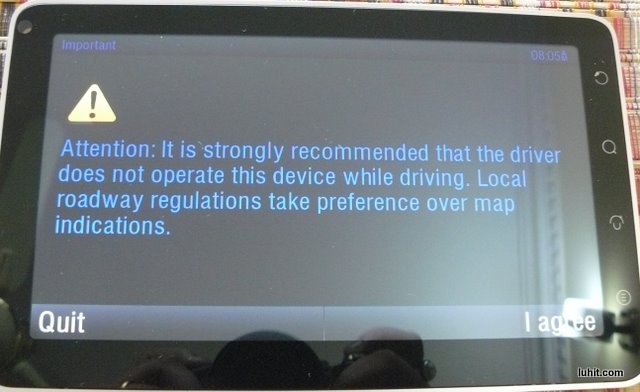 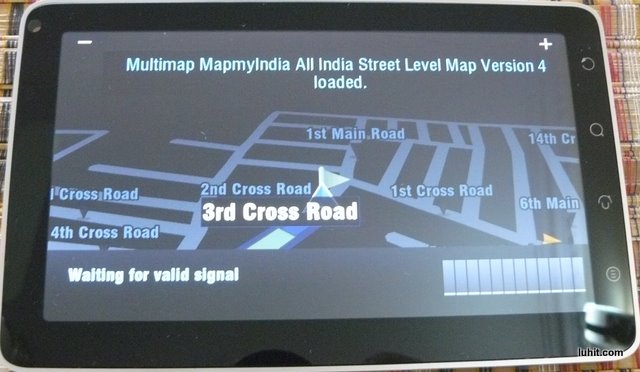 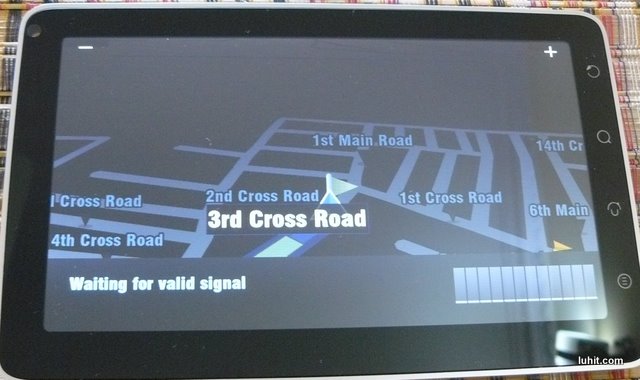 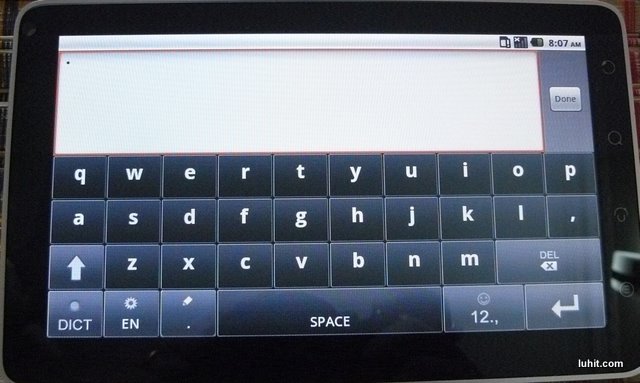 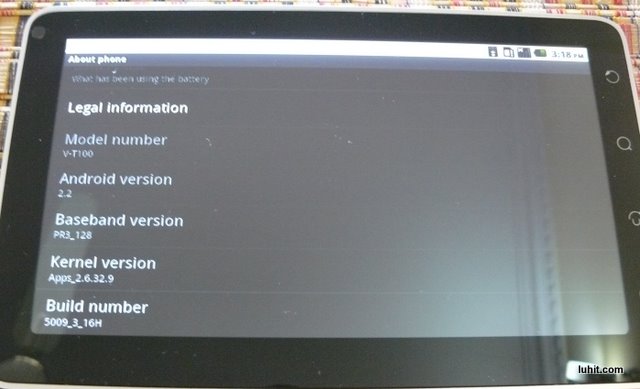 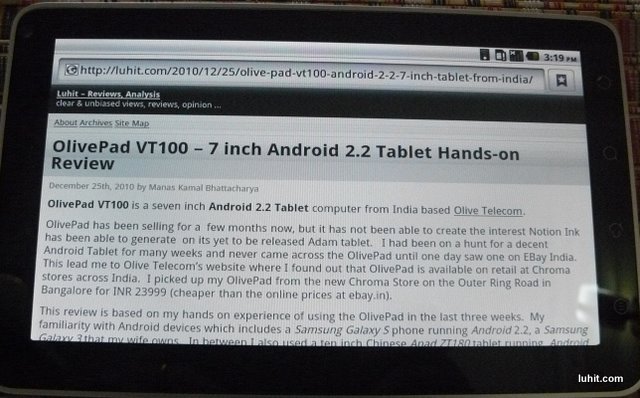 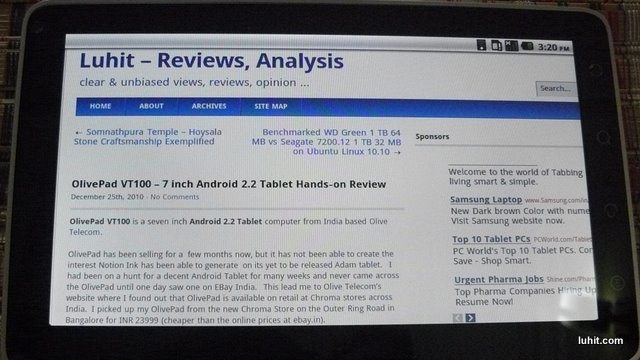 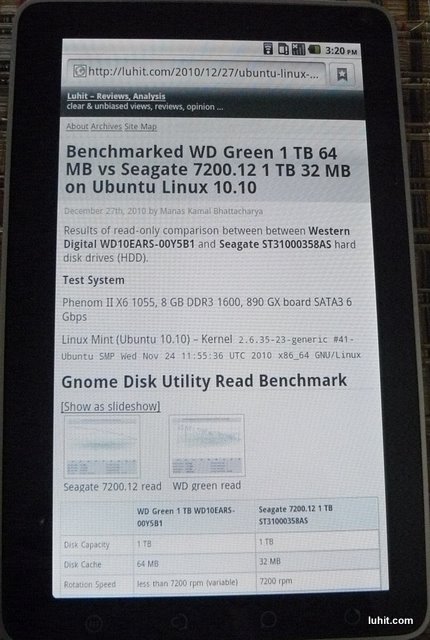 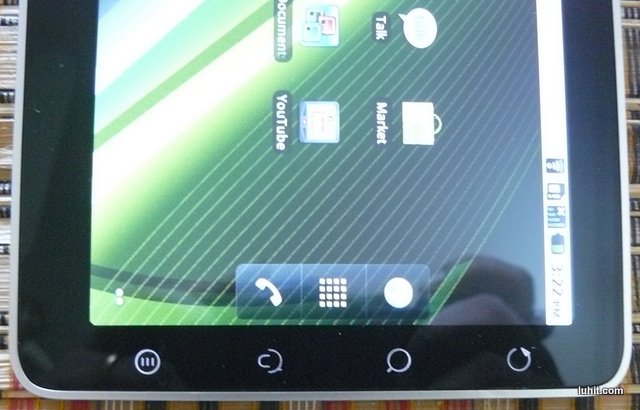 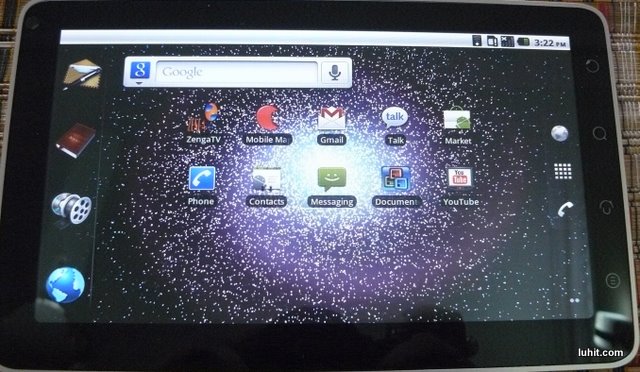 I have not specifically measured the end to end battery life. I have charged the device only far and between.  I would expect it to last at least 6 hours with Wi-Fi. Since I don’t have a SIM card installed, my only network connectivity is the Wi-Fi.  One interesting observation is that even when there is no SIM installed, the mobile radio is running and consuming power – the Battery use menu shows it uses as much battery as the the Wi-Fi.  It would be nice to have this turned off by default if there is no SIM card. I  found the following work around for this –

This keeps the Wi-Fi on and the mobile radio disabled saving power.

At Chroma, I had two choices Samsung Galaxy Tab or the OlivePad. I spent lot of time evaluating the two. I even popped in my SIM card to try out both the tablets with network connectivity. The Galaxy Tab actually is sightly heavier than then OlivePad, but felt smaller and lighter; while the OlivePad felt much more solid.  Comparing the Galaxy Tab with the OlivePad – for me the only tangible advantage was that Galaxy Tab had a much better screen. The faster 1 GHz A8 Hummingbird processor on the Galaxy Tab did not seem much different in  responsiveness compared to the ARM11 600 MHz chip on the OlivePad. No doubt there was be use case where the Hummingbird chip will come handy – but my primary use case was light web browsing and mostly reading eBooks.

Olive Telecom has a pretty good story with the OlivePad. I am kind of perplexed at Olive Telecom’s marketing effort –

Olive Telecom needs to understand that the this is a fast moving market, a product like OlivePad can be obsolete in a short time. A good sales backed up a commitment to future Android upgrades like Gingerbread (Android 2.3) or Honeycomb (Android 3.0 ?) is the only way to keep the product relevant.

If Olive Telecom wants to establish itself as a prominent player in this market – it needs to demonstrate to its commitment to its customers.  Are you willing to invest  in providing newer and better software upgrades and other value adds ? Lear from Apple who have kept older iPhones and iPod Touches relevant for long with software upgrades. Please don’t be a Nokia. A distributed antenna system is a way to deal with isolated spots of poor coverage inside a large building.

When I purchased the salesman at Chroma told me that I could bring the OlivePad to Chroma if I needed support. The Olive Telecom does not provide a phone support number on their website. On their website they have a Contact Us form. I posted a question there if they have any plans to provide a Android 2.3 Gingerbread ROM.  I often post such questions on company’s website, either I never get a response back or get one weeks later.

OlivePad VT1000 is a very capable tablet – excellent form factor, good set of bundled apps, Android 2.2 by default, available at retail stores. Considering the quality of the display, the price could have been a notch lower.

Overall, this is a good buy when compared to the uber expensive  set of Tablets available  – Galaxy Tab, iPad. I would recommend that you try one out in a store before buying.

This entry was posted on Saturday, December 25th, 2010 at 7:36 PM and is filed under analysis, android, reviews, technology. You can follow any comments to this entry through the RSS 2.0 feed. You can leave a comment, or trackback from your own site.